If you want to understand the meaning of a parable, one of the things you can do is to look for the part that seems a little bit strange and unexpected.  In the parable of the Lost Sheep, it’s the shepherd who leaves the 99 alone in the wilderness just to go after the one–that’s odd.  In the parable of the Good Samaritan it’s the  fact that the good guy is not the respected priest but the despised foreigner–what’s up with that?.  In the parable of the Sower and the Seed, it’s the Sower scattering seed recklessly on all types of soil–doesn’t He know better?  And in today’s Gospel parable it’s that the one being praised is the unjust steward.  Jesus actually holds up as an example a man who mismanaged his master’s goods and then cheated the master out of what the people owed him so that after he was fired they would give him room and board.  That unexpected and unusual thing is the key to this parable. So what are we to learn from this? What is Jesus’ point? 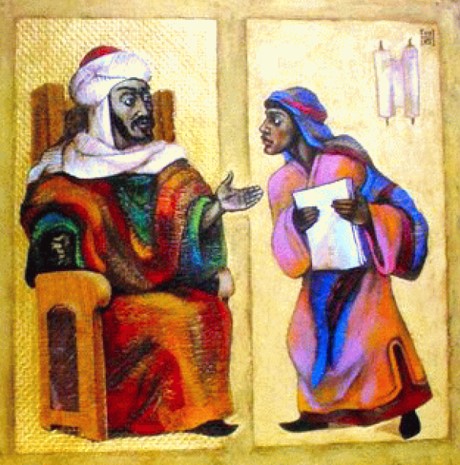 To begin with, we should ask the question: whom does the steward represent?  First of all, he represents us according to our old Adam, who have often been poor stewards of the goods of the Master, the things the Lord has entrusted to us.  Have we always used the money and possessions and abilities that we’ve received from God to serve our neighbor and to help build up the Church and the ministry of the Gospel?  And when we have done that (because we know it’s the right thing to do), has there still been a struggle against the flesh which wants to use our resources for other things?  Isn’t it usually harder to give a significant amount of money in offerings to church or an anonymous charitable gift than it is to spend the same amount for entertainment or a trip or some new thing you’ve always wanted?  Or in our stewardship as parents and grandparents, have we encouraged our children’s devotion more to extracurricular activities or to the Word of God, pleasing their peers or pleasing the Lord?  Are we more concerned about them making a good living or having eternal life?  And are we ourselves more concerned with how we look to family and friends or how we look to God?  More interested in our physical health and appearance or our spiritual health and endurance in the faith? The truth is, if we were called before the Lord to give an account of our stewardship, to lay out not only our bank statements but also the dreams and desires and motivations of our hearts, there also would be cause for us to be dismissed from our stewardship.

However, I would suggest that in a deeper sense, the steward in the parable actually represents Christ Himself, the eternal manager of the heavenly Father’s goods.  For remember what occurred right before today’s Gospel.  Jesus had just finished telling the story of the prodigal son in chapter 15.  Jesus had just been accused of wasting His time and efforts on tax collectors and sinners, throwing away His Father’s “goods,” mercy and forgiveness, on people such as that.  And now He tells a parable about a steward who was supposedly mismanaging goods.  Do you see?  He’s talking about Himself and the way things are in the kingdom of God.

That is the way of Jesus.  He comes to us as one who “mismanages” the Father’s goods, throwing away God’s mercy and forgiveness on us.  It doesn’t matter to Jesus that He’s accused of giving away God’s grace too cheaply.  After all, His grace is not cheap, it’s free, since He purchased it for us at the greatest cost of His own blood!  Jesus’ mission was to bear every accusation, to take all that we are justly accused of and make full payment for our debts.  Jesus made eternal friends of us, not by hoarding things for Himself, but by living as one with no home of his own, no place to lay his head.  The material things of this world He used entirely in the service of others, having nothing but literally the clothes on His back.  He became poor so that we might know and receive the riches of His mercy.  He even gave away His own body into death, so that through His atoning and all-sufficient sacrifice we would be cleansed from all unrighteousness.

Jesus the Steward desires to be received by us, into our homes and into our hearts.  That doesn’t happen by some decision or commitment that we make; it comes by the forgiveness and the release from the debt of sin that He freely gives.  Jesus has done much more than cut your bill by 20% or even 50%.  He’s taken care of it all.  “Behold the Lamb of God who takes away the sin of the world.”  All of it.  You are debt-free toward God in Christ.  Repent and believe that Gospel.

Which brings us to one more important point about the steward in the parable–his faith.  Jesus praised him not only because he was shrewd, but also because he trusted in his master’s mercy.  That’s the key.  He believed that the same master who didn’t have him thrown into prison for wasting his possessions (when he could have) would also be merciful to him by honoring the debts he reduced (which the master didn’t necessarily have to).  The steward knew what sort of a gracious and good master he had, and that’s where he put his hope.  He believed his master to be a man of generosity and forgiveness, and he staked his salvation and his future on that.  So it’s not just the steward’s shrewdness, but it is his faith in the master’s mercy that is praised here.

So also, you are called to trust that the Father is a God of mercy who will forgive your debts through Christ, that you may be received into an everlasting home.  We stake our salvation and our future on the generosity and forgiveness of our God.  It is that faith God desires and which He praises.  We believe that God the Father will be merciful to us for the sake of Jesus–just as Jesus relied on His Father’s mercy and trusted in Him even on the cross.  Remember, as a true man Jesus also lived by faith; He believed that the Father would honor His death in our place to cover what we owed and that He would raise Him up on the third day.

And now Jesus has ordained stewards to stand in His place, to distribute the eternal blessings He has won by His death and resurrection.  Jesus commends His stewards when they “squander” His possessions in the ministry of the Holy Gospel and cancel the debts you owe Him.  That is my job as a pastor–to be a steward of the mysteries of God (1 Corinthians 4:5), to the take the Master’s goods and give them away to penitent believers.  Whenever you hear the Gospel and the absolution, it’s as if I am asking you, “What does your bill say?  What impossible debt do you owe because of your sin?  Sit down, take your bill, and write 0, paid in full.”  You are all squared up with God in Christ–and then some.

Believing that, living in that faith, you are freed to be shrewd like the steward in the parable. As Jesus said elsewhere, we are to be wise as serpents and harmless as doves.  If the people of the world can be passionate and smart about worldly things–money and politics and pleasures–why can’t we be passionate and smart about eternal things?  By faith you are given to use mammon not only to make friends in this life, but to put it to use to make eternal friends in the fellowship of the Gospel, supporting the mission of the church in your offerings and in your estate planning, investing in the things that will last into eternity, using the things of this life with an eye toward the life of the world to come, desiring to be received by your fellow saints into the everlasting home prepared for you by Christ.

That’s what Paul is talking about in Philippians 3.  Paul had much that He could boast of.  He had a noble family lineage; he was a leading Pharisee who was honored as a wise and zealous religious leader.  He had a bright future ahead of him.  But what does he say after his conversion to Christianity?  “What things were gain to me, these I have counted loss for Christ.  Indeed I also count all things loss for the excellence of the knowledge of Christ Jesus my Lord, for whom I have suffered the loss of all things, and count them as rubbish, that I may gain Christ and be found in Him, not having my own righteousness, which is from the law, but that which is through faith in Christ, the righteousness which is from God by faith.”

Here in divine service, unrighteous mammon is put to a righteous use in the sacraments–in the oil of baptism, in the wheat of the supper.  In this way eternal friends are made, bound together by the love of Christ.  Common bread and wine are consecrated to be the holy, eternal body and blood of Jesus, given and shed for your forgiveness.  He is with you.  And in the end when all the accounting is done, there will be an eternal dwelling for you, a permanent home, mortgage paid in full by the Son of God, who gave Himself for you to give you life forever.
✠ In the name of the Father and of the Son and of the Holy Spirit ✠