Not Dead, But Sleeping

Jairus came to Jesus with a desperate plea.  Though he was a ruler of the synagogue, he laid aside all normal decorum, fell down at Jesus feet, and begged Him to come to his house.  For his only daughter, a 12-year old, was at the point of death.  Jairus’ heart was breaking at the thought of losing her.  His only hope was that Jesus could save her and restore her life.  The situation was dire.  Time was of the essence.

All of us must learn to become like Jairus, to recognize our desperate need in this dying world, to set aside our worldly standing, ignoring what others may think of us, and come before Jesus seeking and pleading for His help.  For He’s the only One who can save us.  Like Jairus, we must be unafraid to lay hold of Him, recognizing that there’s no time to waste in this passing world.

As Jesus began to make His way to Jairus’ house, the multitudes surrounded and pressed in close to Him–something like a big celebrity trying to walk across the grounds during Summerfest pre-Covid.  I’m sure Jairus was becoming distressed at the slow pace.  Jesus could have slipped through the crowd if He chose.  He did that once at Nazareth when a hostile crowd tried to grab him and throw him off a cliff.  But He didn’t do that here.  He chose to let the crowd get in His way. 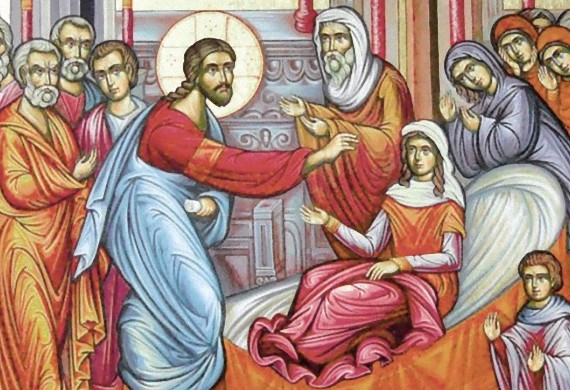 In the crowd was a woman who had been sick for the last twelve years, the same number of years as Jairus’ daughter’s age.  This woman suffered from a chronic hemorrhage, a constant uterine flow of blood.  She’d been to all the doctors and specialists.  She’d tried all their remedies and potions.  They took her money, but things never got any better, only worse.

Perhaps that situation sounds familiar to you.  Even today, with all our medical advancements, there’s only so much that doctors can do for us in our bodily afflictions.  Even after spending thousands upon thousands of dollars on tests and procedures and pills, there’s a limit to what can be done.  We shouldn’t be surprised at that and go running after quack cures and potions.  Sometimes the best a doctor can say is, “You’re just going to have to learn how to manage it and live with it.”

For twelve long years this woman had suffered, not only physically, but also by being isolated from the community.  According to the Old Testament Levitical law, a woman was ceremonially unclean during the time of her flow of blood–which meant that this woman was constantly unclean.  She couldn’t enter the temple.  She was cut off.  Plus, she couldn’t bear children, even as Jairus feared that his 12-year old daughter would never grow up to have children.

This woman heard that Jesus was coming.  “I won’t bother Him,” she thought.  “He wouldn’t want to touch me, anyway.  I’m unclean.  I’ll just come up behind him.  All I have to do is touch his robe, and I’ll be well.”  And so she works her way close to Jesus and reaches out and touches the border of His garment.  And immediately her flow of blood is stopped.  She feels a surge of life flow into her like she hasn’t felt for years.  When she touches the robe of Jesus in faith, she is drawing upon the same energy of God that created the universe and everything that is in it.  She is healed.

Notice that the power to heal does not lie inside of us, some inner energy.  It comes from Jesus.  There is no healing power within us waiting to be unlocked and unleashed.  Inside us there is only disease and death, hemorrhaging away our life.  Life and health come from outside ourselves.  Every healing comes from Jesus, whether through prayer or penicillin or both.  Medicine and prayer are instruments, but Jesus is the source.

This woman’s flow of blood stopped because she had come into contact with Jesus, who would cause His blood to flow for her on Good Friday.  It is written, “He Himself took our infirmities and bore our sicknesses.”  Jesus absorbed all of our ailments, and He crucified them in His body.  He suffered all of our suffering to death, so that in Him we might have real and enduring life and wholeness.  The Epistle reminds us, “In Jesus we have redemption through His blood.”

Jesus immediately stopped and looked around.  “Who touched Me?” He knew power had gone out from Him.  Peter replied, “How can you ask such a question?  The crowds are all pressing in on You.”  But Jesus wouldn’t move until He had dealt face to face with the one who had touched Him in faith.  He doesn’t deal with people anonymously but personally.  Jesus wanted to speak to her, to give her more than she had already received from him. “Who touched me?”

Finally, when the woman saw that she couldn’t hide herself, she came trembling before Jesus.  She confesses the reason why she touched Him and how she was immediately healed.  And Jesus turns her fear to confidence and joy when He says, “Daughter, be of good cheer.”  By calling her “daughter,” he is restoring her to the family, to the people of God.  He is claiming her as His own.  And then Jesus says, “Your faith has saved you.  Go in peace.”  Not just generic faith, which believes God exists–“sure I believe in God”–no this is specific faith in Jesus, faith that dares to sneak up behind Him to touch Him.  Through Him she not only had healing but peace with God.

Doesn’t Jesus still extend the border of His garment also to us?  You are given to touch His garment, too, in this very place and receive His healing and forgiving power.  Just as the woman came into real contact with Jesus, so you come into real contact with Jesus in the Sacraments, particularly the Supper of His true body and blood.  Though you are not yet given to see Him face to face, yet you take courage and come up to Him from behind, so to speak, and touch His garment here at the altar.  And when you come in faith as the woman did, the power of His forgiveness goes out from Him to you.  As it is written, “The blood of Jesus, God’s Son, cleanses us from all sin.”  You are not anonymous to Him; He sees you.  He says to you, “Be of good cheer.  Your faith in Me has saved you.  Depart in peace.”  “Go, knowing that whatever ails and pains and troubles your body I have already conquered and overcome, and you will be gloriously healed and made whole in the resurrection of the body at the close of the age.”

Which brings us back to Jairus’ daughter.  Remember, all of this business with the woman in the crowd was an interruption and a detour from what Jesus was on His way to do.  The story suddenly stops and everything is put on hold.  Isn’t that how life generally is, a bunch of stops and side trips on the way to where you think you want to go?  However, Jesus shows us here that what may at first seem like a detour in our human existence is in fact precisely the road God is giving us to travel.  It’s the actual circumstances and people the Lord gives you which constitute the path you should walk by faith and in love.  For our true destination is not merely our own goals and dreams; our destination is Christ Himself.  He is the path and the way.  Jesus received this supposed interruption as sent from His Father, and He was completely there for this woman.  In the same way He is completely there also for you, even in the midst of the interruptions and the unexpected events of your life.

By the time Jesus is done dealing with the woman in the crowd, word comes to Jairus, “Your daughter is dead.  Do not trouble the Teacher.”  But Jesus seems to ignore the news.  He looks straight at Jairus.  “You trusted in Me when your little girl was sick.  Trust Me now that she’s dead.  I haven’t forgotten you; I will not fail you.  Do not fear.  She will be made well.  Just believe.”

Jairus must have been tempted to think that Jesus didn’t really care all that much for him, at least not as much as He cared for others.  Jesus delayed while his little girl’s life just faded away.  So also we can be tempted to doubt God’s care for us, especially when we see others doing better than ourselves, while our life if full of problems.  “Where is God?  Why does He delay in helping me?”  It’s one thing to trust in God when all is well; it’s another thing to trust in Him when the hand of blessing seems shut and all you have to cling to is Jesus and His Word, “Do not be afraid; only believe, and all will be made well, better than you could ever possibly imagine.”

Jairus must have believed and held out hope in Jesus, for He continues with Him on to his house.  When they arrived, they saw everyone mourning and weeping.  But Jesus said to them, “Do not weep; she is not dead, but sleeping.”  And they ridiculed Him for saying something that seemed so foolish and insensitive.  But from Jesus’ perspective, it was true.  For He knew she would awaken to life.  An ordinary doctor can only help when there’s still life in the body.  But Jesus can help even after the life is gone.  For He is the Lord of life and the Great Physician.

Jesus put them all outside, except for the parents and Peter, James, and John.  No unbeliever would see this miracle.  Then Jesus took the little girl by the hand; He touched her with His life-giving presence and said, “Little girl, arise.”  And by the power of His Word, her spirit returned and she arose immediately.  And He commanded that she be given something to eat, much to the joyous astonishment of her parents.

The world still ridicules Christ and His church today for this teaching of the resurrection.  To human reason it seems to be a foolish proposition to believe.   Yet we do profess, especially on this All Saints Sunday, that those who have died in the faith are asleep in Jesus and that their bodies will awaken at His return to everlasting life.  Remember the words of St. Paul, “I do not want you to be ignorant, brethren, concerning those who have fallen asleep, lest you sorrow as others who have no hope.  For if we believe that Jesus died and rose again, even so God will bring with Him those who sleep in Jesus. . .  The Lord Himself will descend from heaven with a shout. . .  And the dead in Christ will rise.”  There won’t be any more ridicule on the Last Day.  For Christ will put the unbelievers outside, who in their profound regret will die a death that never ends.  But Christ will say to the faithful, to you, “Son, daughter, arise,” and your bodies will be awakened from their grave beds to the astonishing joy of sharing in Christ’s Easter glory and the wedding feast that has no end.

And finally, remember this: the Lord has already raised you from the death of sin to a new life in your baptism.  He calls upon me now to give you something to eat, this holy communion which strengthens you in your new life.  Touch Jesus’ garment.  Trust His word.  Do not fear.  Only believe.  Trust Jesus in sickness and pain and in the hour of your death.  Your faith will save you. Your Jesus will save you.

(With thanks to the Rev. William Cwirla)