We don’t think in terms of kingdoms much any more since we’ve long ago dispensed with the idea of kings.  But we do certainly think in terms of government and politics and power, don’t we.  In the aftermath of the recent elections, that’s at the forefront of everyone’s minds.  Who will be in charge?  Who will govern?  Who will have the power?

So when the Pharisees ask about when the kingdom of God is going to come, what they’re really asking is “When is God going to show that He’s in charge?  When will we see His power?  When will He be the one who governs us as King?”  And this question is understandable from ones who were living under the domination of the Roman Empire, under the governorship of Pontius Pilate.  The Pharisees wanted some visible sign of God’s kingdom and God’s reign.

But Jesus reminds both them and us that the kingdom of God in this world is not about politics and worldly power.  It’s not something you can necessarily see on a map or in government.  Instead, Romans 14 says, the kingdom of God is righteousness, peace, and joy in the Holy Spirit.  It is the Lord Jesus graciously ruling our hearts through His Word.  Until the Last Day, the kingdom of God is a hidden reality, perceived by faith, not with the eyes but with the ears.  For it is written, “Faith comes by hearing the Word of God.” 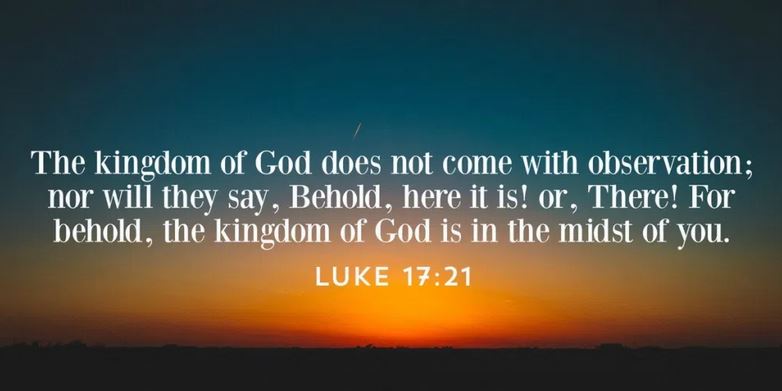 So Jesus’ first point here is that we shouldn’t think of the kingdom of God as only a future thing, when God’s power will become visible to our eyes.  When we pray “Thy kingdom come” in the Lord’s Prayer, we’re not only praying for Jesus to come again in glory at the end of the age.  We’re asking for His kingdom to come among us right now.  And how does that happen?  The Catechism confesses, “God’s kingdom comes when our heavenly Father gives us His Holy Spirit, so that by His grace we believe His holy Word and lead godly lives here in time and there in eternity.”  So the kingdom of God has, in fact, already arrived.  It’s a present reality.  Jesus says, “The kingdom of God does not come with observation; nor will they say, ‘See here!’ or ‘See there!’  For indeed, the kingdom of God is in your midst.”

The kingdom of God was already among the Pharisees, for Christ the King was among them.  And He is the kingdom of God Himself in the flesh.  Hidden beneath and within His true humanity, all the fullness of God dwells, and the entire content of the kingdom is present with all of its blessings.  So wherever the flesh-and-blood Christ is–wherever He is speaking His words to His people and giving us His forgiveness and life–there is the kingdom of God.  Even though Christ is unseen to our eyes, all who are joined to Him through faith have entrance already here on earth into the heavenly kingdom of God.

The old Adam in us, though, doesn’t like to think of the kingdom in those terms.  Our fallen nature prefers to have something that it can see and experience rather than simply trusting in the Word of God.  In that way we are very much like the Israelites at Mt. Sinai.  Moses was gone for a long time on the mountain, 40 days, not visible to them.  The people grew impatient.  That’s how it with us, too, isn’t it?  We grow impatient, waiting for the Lord to come through for us, waiting for some sign of His power and His help.  And that’s when we can be sorely tempted to turn away from Him and follow the ways of the world, to go after worldly ideologies and practices that promise to give us the power or the pleasure which we seek right now.  Having just come out of pagan Egypt, the Israelites were familiar with idols like the golden calf.  It brought them immediate gratification.  A golden calf was a fertility symbol.  When the people sat down to eat and drink and rose up to play, you can imagine what that involved.  Aaron gave the people what they wanted; he would have been much more likely to win election than Moses.

The golden calf event was written down for our warning and our learning.  When Moses came down from the mountain and saw the idolatry and the immorality, he became hot with anger.  Moses ground the calf to powder, scattered it on the water, and made the children of Israel drink it.  In the same way all the modern idols of our day will be crushed in the end, and those who serve them will be forced to absorb the judgment for such false worship.  All who trust not in God-given words but in worldly spirituality and power will be brought to ruin with those idols which they serve.

Let us repent, then.  For just as Moses came down the mountain unexpectedly to judge Israel, so the Lord will come down unexpectedly on the Last Day to judge the fallen world.  Those who rely only on what they can see and observe will have no idea what is about to come upon them.  For as they look around, they will think that, for the most part, all is well.  Sure there may be violence and corruption like in the days of Noah.  Sure there may be self-indulgence and immorality like in the days of Lot, whose home city of Sodom inspired the name for a perverted sexual act.  But people will still be eating and drinking, buying and selling, planting and building and getting married just like usual.  However, as it was in the days of Noah, when the flood suddenly deluged the world, and as it was in the days of Lot, when the Lord suddenly consumed Sodom with fire, so it will be when the Son of Man is revealed.  Those who care only about visible power and glory will then be granted their wish.  They will see the power and wrath of a holy God in all its fury.

However, for those who repent and believe, for us who walk as yet by faith and not by sight, the Last Day is not a day for us to dread but to eagerly anticipate.  For our judgment day has already taken place on the holy cross of our Lord Jesus.  There God poured out on Him all the fury of hell.  The full judgment for our sin that stood against us pummeled Him as He hung there.  He received it all in our place, as our stand-in.

Moses actually foreshadowed that in the Old Testament reading.  God was about to destroy Israel because of their faithlessness and rebellion.  But Moses spoke up and interceded on their behalf.  He got in between Israel and God’s wrath and saved them from a fiery judgment.  Our Lord Jesus did that in the ultimate way for us at Calvary, out of immeasurable love for us.  That’s why Jesus said in the Gospel that “He must suffer many things and be rejected by this generation.”  His love compelled Him to do it in order to redeem us from our idols and purchase us as His own and win for us the entire forgiveness of all our sins.  Your judgment day is in the past, Good Friday.  It’s over and done with and finished.  Just as the Lord provided deliverance for His people Noah and Lot, so also He has provided eternal deliverance for you in His Son.

The kingdom of God comes to you only in the king who wears a thorny crown.  And notice that in the cross the kingdom cannot be seen but must be believed.  All one can see is a bloody execution.  No one can literally view the eternal triumph over sin and death and the devil which took place there.  It must be trusted on the basis of the words of the Lord who declares it to be so–words spoken into your ears and poured onto you with the water and fed into you under the bread and wine.  By faith in those words, we receive the kingdom of God as it comes to us.  For through those things Christ Himself is among us.  In the end the kingdom of God will be revealed in all its glory.  But for now it remains hidden under the cross.  The church lives under a veil, until the fullness of time comes.

So believe the words of God spoken into your ears.  Looking at yourselves, you may see nothing but sin and sickness and trouble.  But listening to the Lord, you hear of the hidden reality that you are His chosen, righteous people and royal inheritors of eternal life.  Looking at the church, you may see nothing but imperfection and struggles and disunity.  But listening to and trusting in the Lord’s words, you hear of the hidden reality that the church is His holy bride, and even the very gates of hell shall not prevail against her.  That is why we say in the creed not “I see,” but, “I believe in one holy Christian and apostolic Church.”

The kingdoms of the world are in turmoil and always will be; it’s a never ending battle.  Things are never settled; there’s always the next election, the next threat, the next conflict.  But take heart, for in Christ the victory has been won.  You are citizens of the kingdom of heaven.  In Him you have peace and certainty about who you are and where you are going.  As it was with Noah and His family, you have been placed in the ark of this Church.  And when the waters subside on the day of our Lord’s return, you will enter into a new and imperishable creation, the everlasting kingdom of God unveiled in all its majesty.  And you will always be with the Lord.  “Therefore, comfort one another with these words” (1 Thessalonians 4:18).