✠ In the name of Jesus ✠

Mary Magdalene is standing near the tomb in the garden weeping.  That sounds a lot like Eve, doesn't it? Wasn’t it in the garden that Eve, with Adam, fell away from God? In so doing didn’t she bring a curse of pain and sorrow upon herself? Wasn’t death the result of her and her husband's sin? In her helplessness and hopelessness and loneliness, Mary Magdalene, the daughter of Eve, weeps.

So it is for all the children of Eve, for all you who are dust to dust. Everything is only temporary in this vale of tears. Nothing lasts. It is written, "All people are like grass and all their glory is like the flower of the field. The grass withers and the flower falls." Even the vitality of youth is permeated by the degenerative power of death. It's the hollowness that you still have after you've taken in your fill of all this passing world has to offer. It's the so-called "fun" you rationalize that ends up taking from you more than it gives. It's the camaraderie you seek by going along with the crowd that turns out to be a sort of crowded isolation. There's ultimately no avoiding the brokenness of mortality. In the end you are left right where Mary is, bent over, staring through wet eyes into the mouth of the grave.

But note what Mary sees. Not only does she see that Jesus' tomb is empty, but she also beholds two angels sitting where the Lord had been. And these messengers of the Lord ask her, "Why are you weeping?" It's almost as if they said, "There's no need for tears any more. For the crucified One whom you seek has risen. He who bore the curse of the world's sin has redeemed you from the curse forever. He who was held by the jaws of the grave has shattered those jaws and has destroyed death's power over you. He who did battle with the kingdom of darkness has crushed the devil's head by His holy cross, setting you free from hellish bondage. Do not cry. For Jesus is alive for you as the triumphant conqueror and the Lord of all." 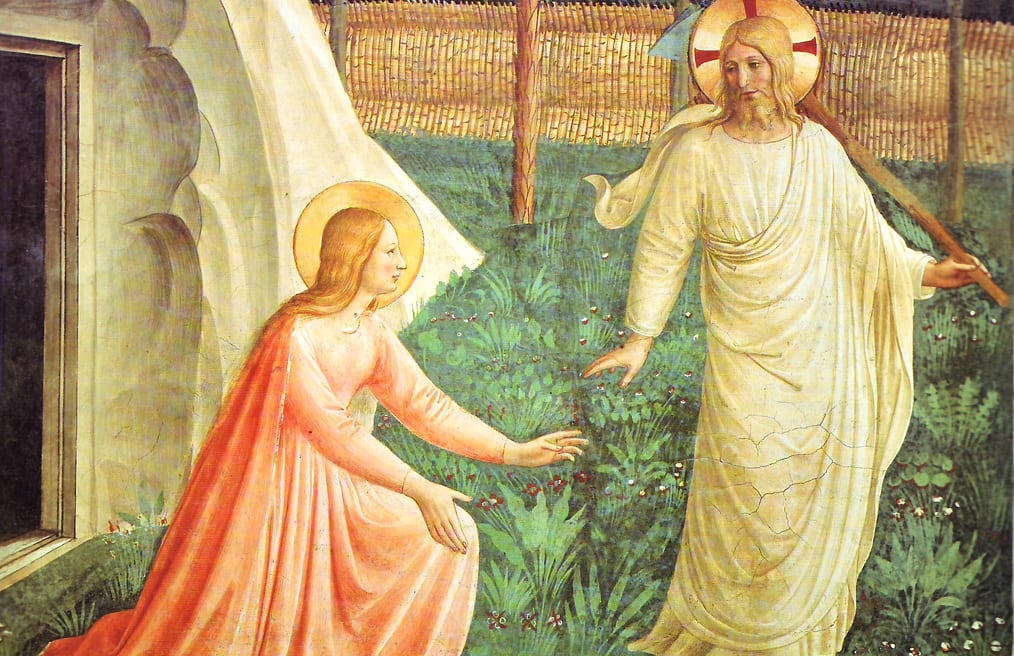 Mary turns around now and sees Jesus. But she doesn't yet know that it's Him. She mistakes Jesus for the gardener. And yet she really isn't mistaken, is she. Jesus is the Gardener. For He is the Second Adam. And was not the first Adam the caretaker of Eden's garden? So also Jesus is risen to restore you, His people, to Paradise. This New Adam walks in the garden in the cool of the new day and reveals Himself to the daughter of Eve. What He brings to her and to you is not judgment but justification, not sin but righteousness, not death but life. Jesus completely reverses and totally undoes the fall. It is written, "As in Adam all die, even so in Christ shall all be made alive."

Jesus is not only the Gardener, He is also the Seed which is planted in the garden. He is the promised Seed of Eve which overcomes the serpent. Jesus had said that unless a seed falls into the ground and dies, it remains alone; but if it dies, then it is fruitful. So it was that Jesus was crucified and planted in the garden tomb.  He is the New Vine of the garden, which has arisen out of the earth, bearing abundant fruit, making you alive in Him, giving you to share in His resurrection.  As Jesus said, "Because I live, you will live also."

Jesus makes Himself known to Mary simply with one word. The sheep know the Shepherd's voice, and He calls them each by name. “Mary.”  In the joy of this sudden recognition, Mary cries out "Teacher!"

Has not the Teacher also revealed Himself to you by calling your name at the baptismal font? Indeed, by water and the Word He drew your name into the name of the Holy Trinity.  He united you with Himself and thereby made you a child of God. So it is that Jesus says, "My Father and your Father, my God and your God."  Do you see what that means? You are given the same status now as Jesus.  All that Christ is and has He has made yours: release from sorrow, abounding forgiveness, indestructible life and joy. By virtue of your baptism into Jesus' death and resurrection, you are now His kin, His own flesh and blood, restored to communion with God and with one another.  Believing in Him you shall share in the everlasting inheritance of His new creation.

Therefore, it is written, "'Behold, the tabernacle of God is with men, and He will dwell with them, and they shall be His people. . . God will wipe away every tear from their eyes; there shall be no more death, nor sorrow, nor crying. There shall be no more pain, for the former things have passed away.' Then He who sat on the throne said, 'Behold, I make all things new.'"

✠ In the name of Jesus ✠